This rifle was built in the shop of John Manton in London about 1810. 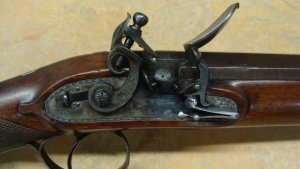 This rifle was built in the shop of John Manton in London about 1810.​

Manton was a gun maker to the Royal family and, of course, many others. He was a leading innovator in improving arms of the time and is one of the fathers of the great London arms trade that was to follow. Even a common gun from his shop was made to the highest standards.

This particular rifle is a very fine and rare example of a .62 caliber sporting rifle used for large game in he early 1800’s.

This rifle came to me because the owner wanted to put the rifle back to its original configuration.

The hammer (cock), frizzen and spring, pan, flash guards, and multiple screws had to be fabricated or filed from rough castings. Then the pan and flash guards were welded into place on the lock plate and everything hand filed to shape. All without damaging the original engraving on the lock plate. After the shaping and filing and fitting of all the parts I hand polished it to the original level of polish and color case hardened the finished product in an original style to make it look like it belongs on this fine rifle.

A nice bit of restoration to make a fine rifle even better.

.
Back in the 1980's I had one of these built with three interchangable barrels (.40 caliber, .50 caliber and a 28 gauge smoothbore), very expensive built. It took two years to assemble, material and the build. I got the gun in late 1982. I would bring it out on nice days for our club shoots, everyone would look at it and shake their heads.

Won the 25 yard offhand match at in 1987 and 1988 at the Colorado State Squirrel Matches using the .40 caliber barrel. After the awards were given out in 1988 a guy from Colorado Springs asked if I would consider selling my reproduction 1810 Maton rifle set. "Let me think about" that was my reply, gave him my phone number.

This was hard as I liked the gun, the way it handled and so on. A friend asked how much did I have invested, had to double check all the bills (all parts I got dealer costs on). Finally got everything tallied up, the Super Grade English Walnut 1/2 stock alone was $400, the rest of the parts totaled over $600 making just those pieces $1,000 in 1980. I got a deal on labor from David Hoffman out of Ft. Collins at another $1,000 (he worked on it as the mood hit him). Figured this was a $2,800 - $3,000 piece retail. I called him and we talked about the Maton and how well it handled, the more we talked the more excited he got. No money had been mentioned up to this point, then out of no where he's says "Would you consider $5k ($5,000)". I waited a few minutes and told him I would have to consider it, he came back and told me his top bid would be $5,300. I took his offer.

beautiful. My Mortimer is nice but that is the cat's meow!

Fine work for more than 200 years ago.
T