Long story, but wanted to share some background on this.
In the 70’s my wife’s grandfather, Burt, put together a CVA mountain rifle kit in .50 caliber. (Yes, one of the “Made in the USA” on the barrel ones). His wife bought it for him, more for the project than his desire to shoot a BP rifle. After putting it together he hung it on the mantle. He didn’t know how to shoot one and figured one day he’d run into someone that he could have show him how to shoot and care for them.
He never did get around to shooting it.
When I met him I asked him about it and he told me the above story. It had hung on the mantle for about 40 some years. I told him that I knew about them and could pick up a couple things to be able to shoot it ( I only had stuff for my .54). He said he’d love to shoot it.
As happens, a few years went by without us getting the chance to take it out. Burt lives about an hour away from us.
This year he up and gave it to his son in law, my wife’s dad Ted. Ted noticed a few problems with it and brought it over to me, knowing that I am “crazy” for muzzleloaders.
It had some slight surface rust here and there, but not bad at all. I found the bore to look great, it had the super dried factory grease still in the barrel. NOT fun to remove I might add The set trigger didn’t work, the hammer released from full cock if you pushed on it with not much pressure, and both the wedge pins could be easily pushed out.
I shimmed the bottom of the stock, as the wedge pins were so loose just bending them a bit didn’t work. I read that the stocks were inletted too much from the factory for the trigger assembly, very common issue, and so I shimmed the front of the trigger assembly a bit. All functions as it should now.
Ted and I decided that Burt should be the first to fire it. We did just that about a month ago. I just did a light load of 3f and damp patch lube so several shots could be easily fired. Burt looked like a kid at Christmas when he shot it off that first time.
Ted left the rifle with me so I can establish a good shooting hunting load for it, which is the reason this is in the range report section. I finally got out and shot it yesterday.
The first target was 50 yards, 70 grains of Goex 3f, a .490 Hornady RB, and a .015” cotton patch hand lubed with Frontiers patch lube. The low right shot was the foul shot. I made a sight adjustment and then fired 3 more. I swabbed between shots with one damp and one dry patch. 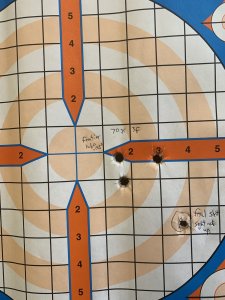 I upped the charge to 75 grains and shot 6 more times. I felt myself pull the left most shot, but am not sure about the other one out of the group. The other 4 shots made a ragged hole. 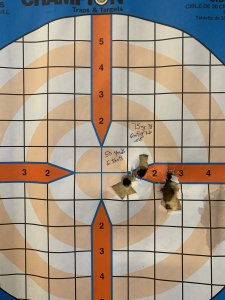 The rear sight has no windage adjustment, so when I got home I drifted the front sight to the right a bit after cleaning the rifle.
I think it’s going to be a shooter.
Last edited: Jan 6, 2021
B

I have one of the USA made ones I built back in the early 70's and it shoots about the same size group . It and its companion mountain pistol both 50's have several Deer to there credit over the years.The rifle was my first Black Powder gun I ever built or shot the pistol was the second.

WAY Cool as a late Black Powder Bloomer I hear of the "USA CVA Ghost" glad to see some one having fun, and one still stable enough to shoot

Nice shooting.
I love my CVA Mountain Rifle.
I just might buy another
J

Location
A bit WSW of Houston

Great story. I also have three CVA US versions. I built my first one from a kit in the late 70's in .50. Had to heat and bend the hammer to make it align with the nipple. We found a built but unfired kit in .45 for my older son in the early 90's. I found a factory built unfired US made at a gun show 25 years ago so cheap I bought it for a backup gun when I shot the barrel out of mine. Roughly 7000 rounds later that first kit gun still shoots a 2" group at 50 with 70y eyes. The 'spare' is still unfired and sitting in the gunsafe. Great shooters for the money. My first kit cost $68, bought off a pallet of them in a Hecks (kind of like a Kmart) Store in 1977. I really like the sights that come with them. Don't care for the aluminum ramrod tips and jag that came with them, but that's easy to fix.
You must log in or register to reply here.
Share:
Facebook Twitter Reddit Pinterest Tumblr WhatsApp Email Link