Menu
Log in
Register
Install the app
You are using an out of date browser. It may not display this or other websites correctly.
You should upgrade or use an alternative browser.

set up at annual gun show at town couple counties over, always find something to bring back vs. sell, anyhow, Pietta 12 ga, muzzlloader, 90% finish, felt dent in bbl. made deal as I know I can get dent out, and trading a .22 rifle ($200) was new owner. Stripped bbl and started browning just to see how it would take, then used socket and threaded rod to peen dent out. Can see where I tapped/peened dent on browning surface, can hardly feel dent, will cover nicely when finished browning. Ironically same show where two years ago I picked up a 10 ga. Pedersol double that had non functioning right lock (Dixie still carries parts) and painted como! Strip, fix, brown, Now my favorite dove gun. We'll see how the above one patterns. 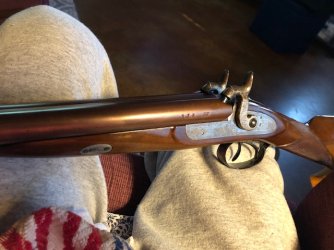 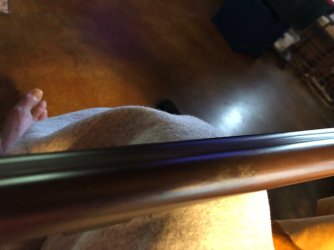 don't let a dinged barrel run you off, use it to drop the price! Anyhow, the above, addresses dings "in" (from the outside) not blow outs as in barrel obstructions etc. In muzzleloaders it helps tremendously if it is cyl. bore. Chokes cause a different problem, but can be addressed. Choked guns that "break" open can be addressed from the chamber end. If you get one, I can describe how I "pulled" the dings out of two so far, if you cant find a reasonable gunsmith I can describe how I did it. Old gunsmith, long gone from Seminole Alabama, told me how to do it some years back in case the correct gunsmith "tools" weren't avalable.

Tell us ALL how to do the Ding Out technique!!! Looking fwd to it!

on a cyl. or no choke ML (or other shotgun bbl., find a socket that "just will" fit in the muzzle, i mean close. ( at local pawn shop, i went through a hundred, get a threaded rod long enough to reach past the dent, use 2 nuts to fix socket on one end and I used two more with large washer on the other end to tap back out of bbl. Grind and polish a angle on the leading edge of the socket so it starts sliding under the dent easier, grease socket, start socket into dent with a light tap and then with a small hammer(brass or steel) tap around the dent, tap the socket a little deeper, tap again at the dent. You will quickly see the dent is rising. Keep tapping in the socket (you don't want to "drive" it through as you may remove inner bbl material and you don't want to do that) and tap the dent and around the dent. You are raising the dent up/out. You will finally be able to tap the socket past the dent. If your rod is long enough or you remove the nuts/washer from the drive end, just tap/push the socket out or tap it out from the drive end hitting the washer. on a breech loader with choke, just do it all from the breech end. Whew! hope this all makes sense, will add photo of rod and socket later.
Last edited: Sep 13, 2022 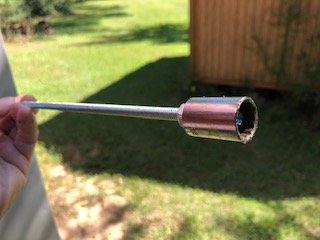 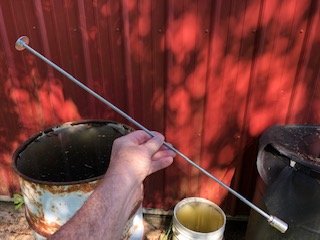 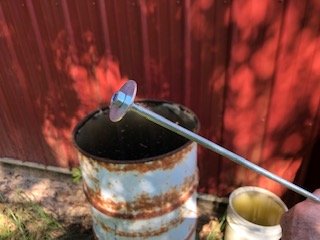 Register today and take advantage of membership benefits. It's FREE!

Did you know that registered members can turn off the ads?

Thank you! Please check your email inbox to continue.
There's already a member associated with this email address. Please log in or retrieve your password.
Already a member? Click here to log in
Top