Went back to the range yesterday. Wasn't really planning on it but my dad bought a new 30-06 and wanted me to sight it in for him. While i was working on the CF, there was a guy next to me with an older Optima who was trying to sight in. He was having some major problems. He was shooting T7 pellets. Not sure about the bullets. But watching him swab and clean the barrel every shot or two gave me a new appreciation for BH209. Well i finished up the 06 and figured id shoot a few with the ML since i was already there . I put 3 shots down range and the guy asked me if i forgot my cleaning supplies. i asked why and he said you shot 3 without cleaning. You wont be able to shoot a 4th. I told him i was ok and he just kind of scoffed at me. Well i let the ML sit for about 10 min then shot 3 more. By this point he was staring at me trying to figure out how in the hell i was putting bullets down the barrel with such ease. I told him i use Blackhorn 209 and he mumbled something about rich young kids under his breath. I chuckled and he said well there is no way you hit the paper with those 6 shots. We walked downrange and his jaw dropped when he saw my target. 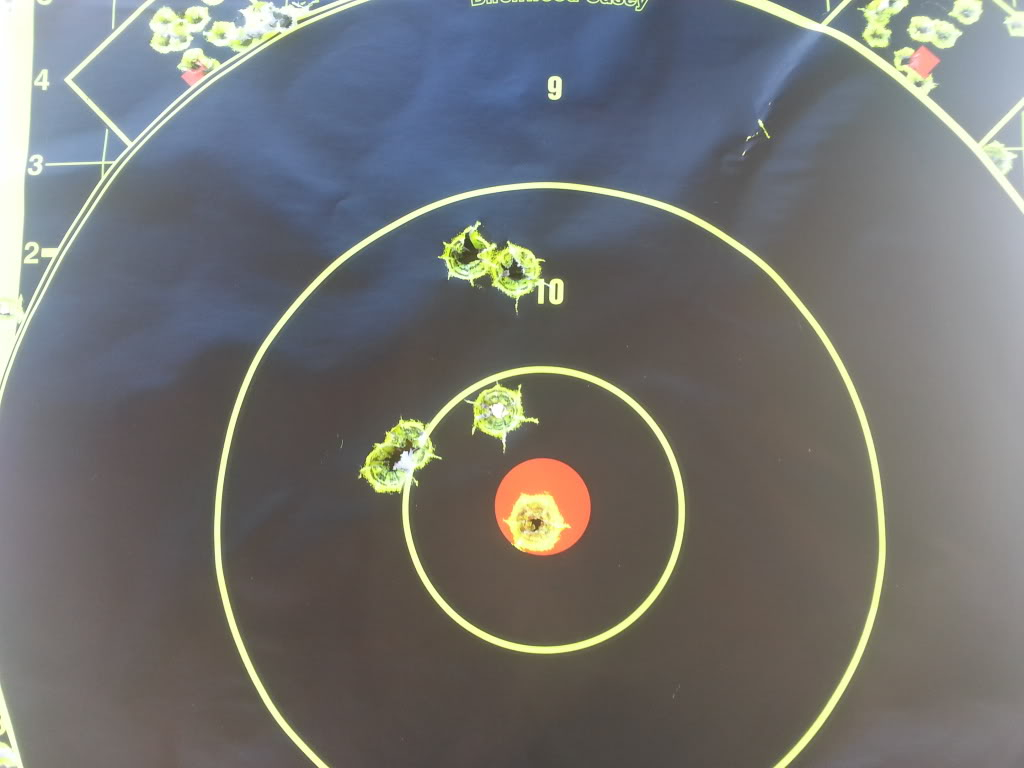 Shots 1 & 2 are the 2 on the left of the inner ring that are touching. 3rd shot i pulled high and is the left of the 2 shots near the number 10. I made the scope adjustment and the 4th shot was dead on. 5th is above it and 6th is the one that is next to the number 10. 2nd group i was paying more attention to him watching me than actually shooting lol. Well he got REAL interested after he saw these groupings. I pulled my BP (which he was amazed that it came out so easy with no tape or grease) and i let him look down the barrel. I told him i run a brush down once about 12 shots ago and he was amazed. He said he was going to try it cause he was ready to chunk his ML and go back to his CF. So long story short, i glad i found the forum and got hooked up with the good stuff before i just went out and started buying stuff. Cause if i was having to scrub and swab after every shot, i probably would have gone back to a CF as well lol.

On a side note, i have started wondering about my 3rd shot. every 3rd shot is high. surely im not pulling every 3rd shot (has this problem last weekend too). If the barrel is real hot, would a shot go high?

:lol: got to love that. You should have sent him here! We would have got him all straightened out and shooting good.

He got a Remington 770. I told him to get the 700 but he didn't want to spend that much. but you cant really beat $320 off the shelf at Gander Mountain with a 3x9. They said it was bore sighted but it wasnt even on the paper at 50 yds. I had to ask someone to watch where the dirt was flying to get an idea which side i was hitting on lol. had to shoot a box of shells just to get it shooting halfway decent at 100 yds. He has a woodmaster 750 that he sent back to remington to get repaired. that thing is like 60 years old though. i dont think he wants to shoot it anymore once he gets it back.
H

First off Pat, thats some great shooting :!: I also want to say I liked the way you handled "THE KNOW IT ALL GUY". I liked the way you let your shooting speak for it self. I have run into guys from all over the world who, in their own mind, think they know everything but in reality they really know nothing.
I tip my hat to you sir.